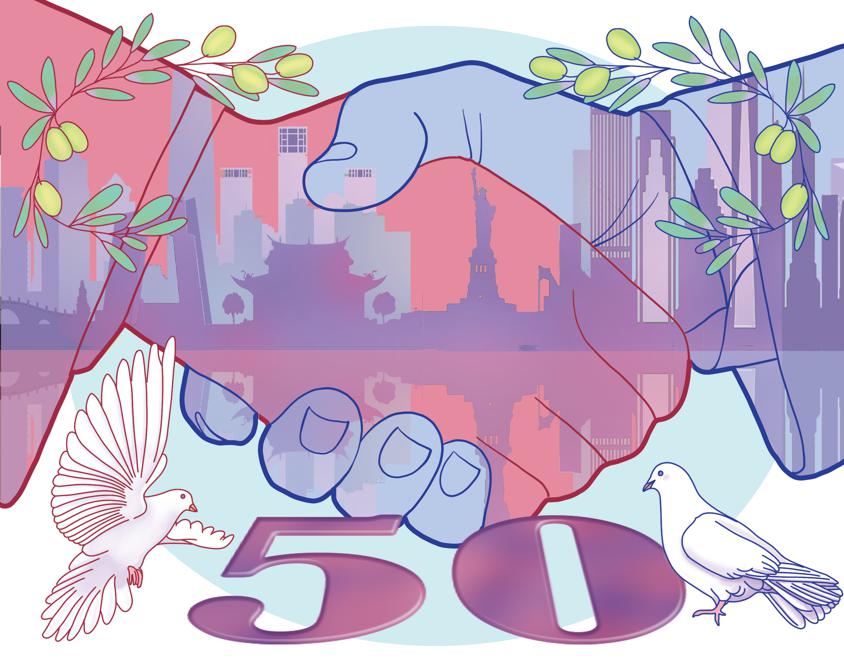 This year marks the 50th anniversary of the Shanghai Communique.

Half a century ago, when the US president Richard Nixon visited China, the leaders of China and the United States decided to reach out to each other for "a handshake across the Pacific Ocean".They issued the Shanghai Communique, breaking the isolation from each other and starting the normalization of relations between China and the US.

Through intensive dialogues at the strategic level, the two sides explored where their common interests lied and reached a broad range of consensuses which were finally reflected in the Shanghai Communique. It stated that "countries, regardless of their social systems, should conduct their relations on the principles of respect for the sovereignty and territorial integrity of all states, non-aggression against other states, non-interference in the internal affairs of other states, equality and mutual benefit, and peaceful coexistence" and "neither should seek hegemony in the Asia-Pacific region, and each is opposed to efforts by any other country or group of countries to establish such hegemony".

Those consensuses motivated the two countries to join hands to maintain the world's balance and created a feasible paradigm for the two countries to follow in their future bilateral relations. It was stated in the Shanghai Communique that, "the US and the People's Republic of China are prepared to apply these principles to their mutual relations". With the normalization of China-US relations, China moved on to integrate into the global economy and take steps to modernization. Meanwhile, it became increasingly clear to the US that a stable and prosperous China, with which it maintained good cooperation, was indispensable for safeguarding its long-term interests in the Western Pacific region.

The Shanghai Communique crystallized the kind of strategic vision and diplomatic wisdom of the two countries in a particular international environment, and is an exemplary model for successfully handling complicated international relations.

For the past half century, the China-US bilateral relationship has not been without disputes or conflicts while the two countries worked with each other sometimes in a friendly atmosphere and sometimes not. However, they have generally managed to ensure a positive trend in the relationship by adhering to the Shanghai Communique, paying more attention to the positive aspects, while curbing the negative aspects.

First, the national leaders have played the key role in determining the strategic direction. From "the ice-breaking meeting" 50 years ago to the establishment of the China-US diplomatic relations, then the state visit by former Chinese leader Deng Xiaoping to the US, to the August 17 Communique concerning the US arms sales to Taiwan; and later on, calling for exploring the possibility of building a constructive strategic partnership and a new model of major country relations, it has always been the leaders of the two countries who have guided and led the relationship from one progress to another, without which we could not have come to where we are and could not have expanded the bilateral cooperation to the global level.

Second, the two countries have been able to pursue common interests while overcoming their differences in ideology and social systems. The trade volume between China and the US expanded from less than $100 million in 1972 to more than $755 billion in 2021.Before the COVID-19 pandemic, the number of visitors traveling across the Pacific had increased from almost zero to more than 5 million tourists and more than 400,000 overseas students every year. The extensive relationship has not only promoted vigorous economic ties between the two countries and helped to improve people's livelihoods in the two countries, but also stimulated the increase of global wealth and the deepening of economic globalization.

Third, the two countries have been able to take the overall situation into consideration. When confronted with a crisis, the leaders of the two sides have remained calm and exercised restraint while trying to find solutions. This explains why China-US relations could recover from such serious crises as the bombing of the Chinese embassy in the former Yugoslavia in 1999 and the South China Sea plane collision in 2001. The relationship was able to move back on the right track and the two sides ultimately established a series of risk management and control mechanisms such as military hotlines and codes of encounters in the air and at sea.

In recent years, as China has grown stronger, the US' perception and judgment of China have changed, and it has deviated from the successful practice of fostering favorable bilateral relations, as a result the relationship has entered a period of turbulence and uncertainty. The US government has become very concerned about China and stepped up its global strategic pivot to the Indo-Pacific region. It views China as a strategic competitor to the US and focused its competition with China in the area of science and technology. It also uses ideological issues as the leverage to tighten its containment of China step-by-step.

All these developments have resulted in a severe setback in the China-US relationship which has been deteriorating on a downward spiral rarely seen since diplomatic relations were established. Given the rather serious and urgent situation, many people in the two countries have begun to worry about the possibility of a new Cold War and other countries are also concerned that the competition between the two major countries may tear the global system apart.

In November, 2021, the presidents of China and the US held a virtual meeting. President Xi Jinping compared China and the US to two giant ships sailing in the ocean. He said it was important for the two sides to keep a steady hand on the helm, so that the two giant ships can break the waves and forge ahead together without losing direction or speed, still less colliding with each other.

As these words are still ringing in our ears, on the occasion of the 50th anniversary of president Nixon's visit to China, we should cherish the memory of these predecessors, learn from the experiences over the past 50 years while keeping our eyes on the future and think about what kind of a new paradigm the two countries should establish for the next 50 years in order to maintain the stable development of China-US relations and ensure continued cooperation.

The two countries could start by offering mutual strategic reassurances. In his virtual meeting with US President Joseph Biden, President Xi put forward three principles for China and the US to uphold in the new era: mutual respect, peaceful coexistence and win-win cooperation. We can take them as guide in readjusting and reforming the paradigm of the new relationship in the future.

China and the US need to update their channels of communication and enrich their dialogue with more ideas on strategy and security, and view each other's strategic intents in a calm and objective manner. These measures should be designed not only to set "guardrails" for the relationship, but also for equipping the ties with more predictability and maturity compatible with the changes of the times.

As two major global countries with unique characteristics, China and the US must respect each other's choice of social system and path of development. Issues related to Taiwan, Hong Kong, and Xinjiang bearing on China's sovereignty and territorial integrity are part of the country's core interests, and must be respected. There is no room for compromise on the part of China on these matters.

China needs a favorable external environment for its development and it intends to carry out higher-level opening-up with more sectors involved on a larger scale and share more development dividends and opportunities with the international community, including the US. To follow the logic of economic globalization which is led by the advance of science and technology, people from all walks of life in the two countries must firmly oppose the attempts to push for "decoupling".Attempts to maintain national competitiveness and innovative superiority by "decoupling" will ultimately backfire.

The two sides should try to do more things that add to the relationship rather than doing things that subtract from it so as to help accumulate the strength needed for the stable and sound development of bilateral relations in the future. China and the US have common interests and great potential for cooperation on many global issues, such as fighting the pandemic, maintaining global economic stability, preventing nuclear proliferation and controlling climate change. The two sides should shoulder their joint responsibilities and promote the international community to respond actively to these issues together.

The author is a former vice-foreign minister of China. The author contributed this article to China Watch, a think tank powered by China Daily. The views do not necessarily reflect those of China Daily.